The Webstock Trading Card Game was an evolution of the one Kai and I ran at WebDU, but this time there were 28 cards (instead of 15) and more attendees. So with lots more rules and potentially heaps of entries, how did it go?

Well, from my end, brilliantly! There was a real buzz, and wandering around you could see people swapping cards, bargaining, haggling and teasing each other. Ange Vink’s graphic work was simply gorgeous, and the envelope that the starter cards came in gave them a real sense of being precious objects. 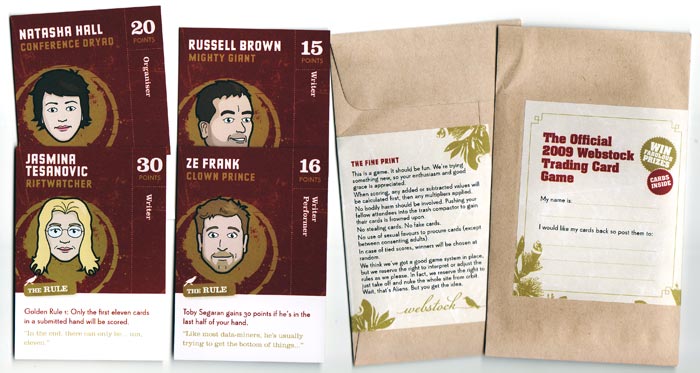 The Webstock game cards and envelopes.

It seems like the Webstock atmosphere of jumping in and getting involved had everyone going. Some workshop attendees from the earlier days had even managed to cobble together impressive decks before extra cards were released, just by harvesting starter cards from the conference bags! By lunchtime there was already one group who had a document up and running with almost all the cards and rules laid out: 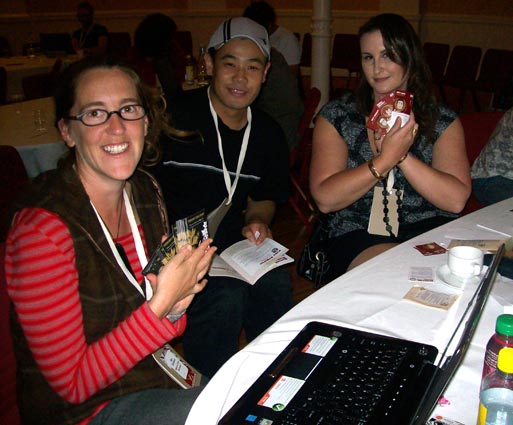 The Social Development team in full flight- the laptop has their comprehensive document!

Kai and I fielded various rule clarifications and sidestepped sneaky attempts to get us to reveal the game’s secrets. The Webstock support people, who couldn’t enter (for obvious reasons), instead started their own game of “get a photo with each speaker holding their card”. And then when we headed out for dinner at a nearby Japanese restaurant, I noticed people at another table analysing cards while waiting for their sushi to arrive! 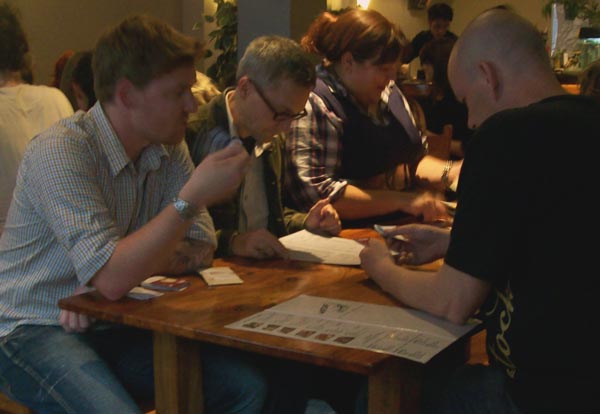 Then there was the infamous spreadsheet that appeared on Google Docs as someone attempted to crowd-source the best deck! That led to a few frantic back-stage conversations about whether it was in the spirit of the game, but given that much of the conference explored ways of harnessing the wisdom of the crowd, we figured it was cool.

And yet it appears that even the might of the masses wasn’t a match for the wily Kat Hardisty, who took out the main prize of the kick-ass Weta Goliathon 83 Infinity Beam Projector.

Second place went to Simon Green, who got the astonishing Pleo. Kai’s wife Diane picked it up to check it out; it looked at her and then nuzzled into her body- instant fan!

Chatting to Simon, it turned out he’d stay up until 5am working on a Perl routine to max out his score. Fantastic, but my favourite geek tidbit was that he probably could have gotten to bed earlier, but he decided at around 2am to refactor his code because it was too ugly!!

Dan Roberts took out the IXUS camera, Matt Saunder the Weta mini-Goliathon, with Adrian Butcher, Jeremy Arnold and the LINZ web team rounding out places 5 to 7 and scoring some nice swag from Intergen.

Narelle Smith won a spot prize for amazing creativity- all her cards had some kind of artistic treatment, and there was EVEN A BRIBE included- players of future games, take note!

Finally, the lovely Sonali Mukherhji snagged a Flex book for coming, ahem, last not quite first. She was a little faux-mortified, but as I explained, she still beat everyone that didn’t enter and in the end came away with more than many others. You’ve got to be in it to win it!

I had a blast running the game with Kai, and want to thank Stefan, Bek and Diane for helping out. We’ll get everyone’s final scores up soon, and we’re looking forward to running a new variation at another conference soon.

We might even post the maximum achievable score, but as the rules were created by a massively cross-linked, parallel-processing neural net computer*, it may take a while to sort that out. Stay tuned!

*And here, of course, I refer to what is colloquially known as my brain.