Okay, so we know that updates to Barely Out Of Beta have been slow of late, but that’s because we’ve been working on a Top Secret Project! And now, in a moment that will surely rank with the Valerie Plame scandal, we’re pulling the wraps off it for public consumption:

And we can guarantee that this will be updated weekly. It has to, or Microsoft has promised to visit unlimited angst upon us! (I think they were going to force us to upgrade from XP to Vista… kidding, guys, I’m kidding!)

Anyway, Server Versus Client combines Steve’s gorgeous artwork with James and my bowling-ball-sharp wit, so I hope you get a chuckle or two from it. From our end, we’ve been very impressed with Microsoft Oz’s willingness to take the piss; if they keep this attitude up, maybe some of their northern fellow workers may consider becoming Australians!*

To see the comics in their natural environment, head over to the official Australian Server 2008 site.

* We leave as an exercise for the reader to decide whether it’s a compliment or an insult.

Edit: Gah! Okay, so maybe no Valerie Plame moment: I’ve been to slow typing and Deeps De Silva and Scott Barnes have beaten me to the punch. Oh, the shame…

As I mentioned last year, we’ve been working on a webcomic for Microsoft Oz for the launch of Server 08, and thus our own Barely Out Of Beta comic has had a hiatus.

That’s been even more the case as we leapt into a second comic for Microsoft covering Studio 2008! Well, we’re closing in on the end of production, so we’re going to start uploading the comics on a regular basis. To kick things off, here’s the first Server 08 one, called “Powerpointy”: 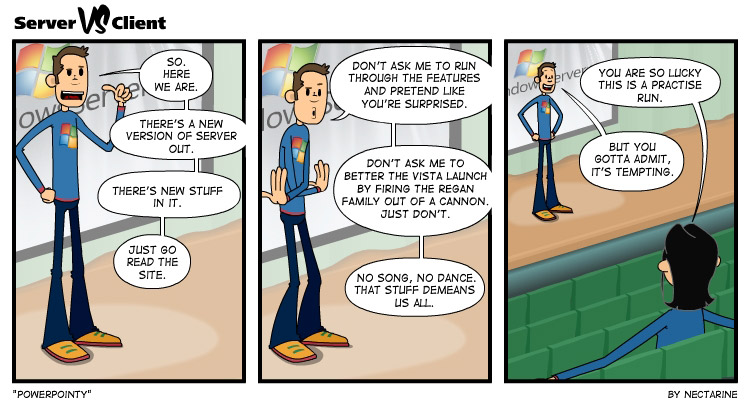 I don’t know where the idea for this came from. I mean, it’s not like I’ve ever made any uber-geeky giggling jokes like this when I’ve been at a trade show. 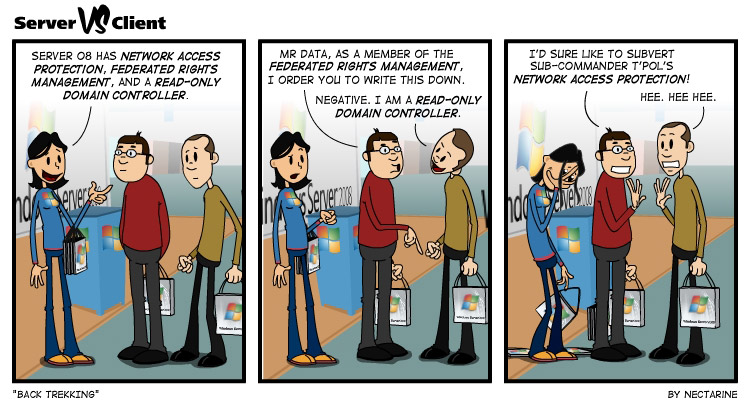 Now, I need to point out that James suggested that the final panel should have referred to Seven of Nine, not Sub-Commander T’Pol. And he’s probably right. But I’m old-school, and Vulcan chicks are hot, and by hot I mean totally sweet. So sue me (or sosumi, if you prefer, you Apple geek).

This one is for anybody who ever thought “Hey, the code-name for the software was much cooler than the release name!”. 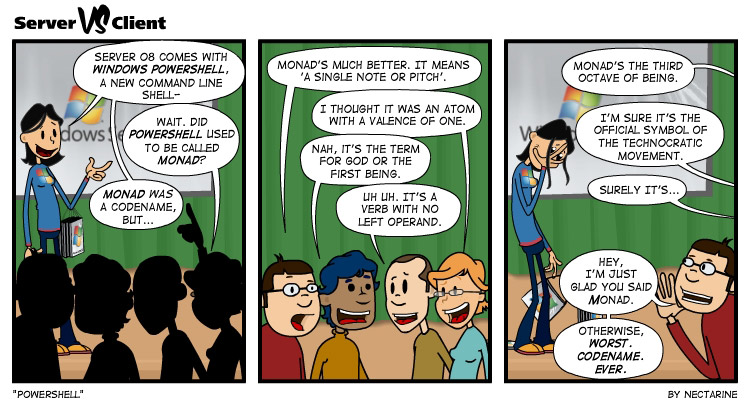 Ah, the final tag-line. Works fine if you pronounce Monad as “Mow Nad” but not so well if you incline towards “Moh Nad” (or if, unlike me, the first rhyming word you come up with isn’t “Gonad”.)

Nectarine webcomic #4 – Microsoft Server 08 “Did You Ever Know”

So basically this is how I see myself every day. It’s fun living in my head! 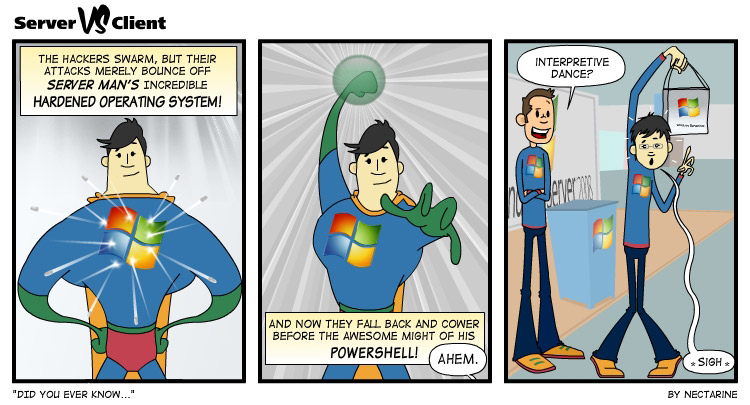 And yes, that is supposed to have some sort of oblique resemblance to Hiro from Heroes… 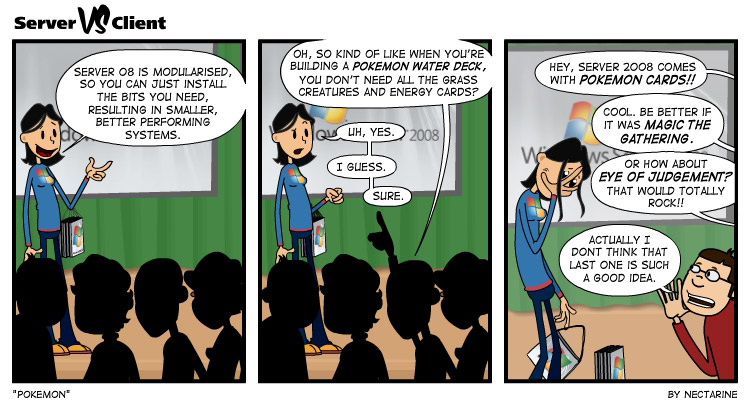 Oh, come on, you know you’d by more software if it was bundled with a TCG!

And in case that last speech bubble is too obtuse, it’s an oblique reference to the fact that Eye Of Judgement is built around the PS3, a direct competitor to Microsoft’s XBox. Get it? Get it? Oh, what self-referential characters we are…

I don’t know if this really ever happened, but given my experience with marketing departments, I’d say it’s at least a 50/50… 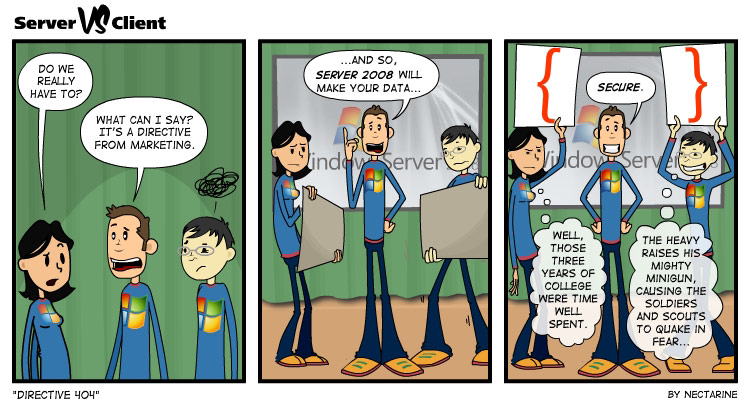 Just in case you missed the whole bracket thing, it’s a piss-take of Microsoft’s text styling at Heroes Happen Here. And if you haven’t played Team Fortress, you need to crank up that Heavy and run around (just make sure there’s a Medic in support!)

Another piss-take of Microsoft’s text styling at Heroes Happen Here: 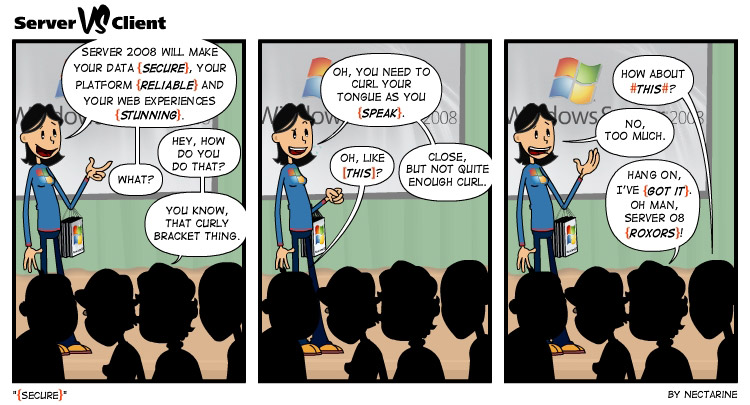 Somehow in my mind, I imagined it’d sound like one of those clicky-back-of-the-throat things that are sprinkled through some African dialects. (And possibly some African Daleks too, especially the ones that haven’t had their regular servicing… but I digress.)