I just did. Here’s why, and if my reasons resonate, I hope you’ll kick them a few dollars too!

But perhaps most importantly for me, it’s because of how it succeeded. In the early days, detractors scoffed at the idea of a compendium of knowledge that anyone could contribute to. They said it’d fall apart under the weight of bad writing, faulty facts, and general bickering; that it’d bring out the worst sides of online communities. And to tell the truth, I had my doubts too.

It didn’t implode- despite some struggles and controversies along the way, it grew into something that serves me usefully every day. And that gives me hope. It’s easy to be focused on the tragic and horrible things happening in the world and worry about the human condition. But here’s a massive collaborative endeavour that suggests that, as a species, the averaged result of massively diverse humans working on a concept is astonishingly successful.

And if that’s too naively optimistic for you, then how about: 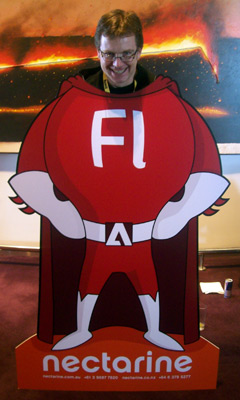 Web On The Piste approaches!