Whatever nervousness I had about the WebDU Trading Card Game rapidly disappeared as it quickly became apparent that most people at the conference, from speakers to attendees, had caught the trading fever. It was lovely how enthusiastically people embraced the idea, and how much it succeeded in its fundamental objective of creating a talking point to get everyone engaging socially.

Kai Koenig and I fielded a slew of questions about the finer points of the rules, and I hear the Daemon team did the same. There were semantic debates about the meaning of ‘behind’ and ‘next to’, philosophical questions about who was really considered ‘American’, and poor Dale Rankine copped some good-natured ribbing about the special rule for his card along the lines of “sorry, Dale, had to bend you over as you were worth more to me that way.” Ahem. Well, quite.

Some people chose to collect all the cards and get them signed, rather than enter the final competition. Others could be seen with their stash laid out on the conference floor, consulting pages of hand-written notes as they sought to divine the most valuable hand, and someone even whipped up a Flex app with some data grids to do the same! There was trading and bartering and haggling. The BlueScope Steel team were not unafraid to let me know their expectations to do very well in the prize department! Wonderful stuff. 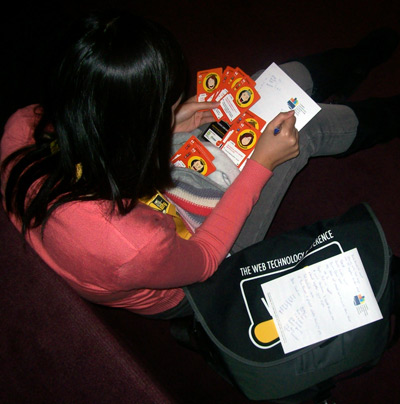 With the animations and various other materials we were preparing in the leadup to WebDU, I had to make some decisions about the limits of the game. One of those was sticking to 15 types of cards, which precluded having a card for every speaker. Apologies to anyone I left out, even those who badgered me mercilessly about it- yes, Adam Lehman, I’m looking at you!

My thanks go to my fellow gaming fan Kai Koenig, whose support, enthusiasm, insightful suggestions about the gameplay, and fab bit of CF scripting magic to score the cards were all invaluable. Also to Geoff and Julie and the Daemon crew, who provide both a venue and an atmosphere where this sort of experiment can thrive. And let’s not forget Adobe, Wacom, Microsoft and Friends Of Ed who provided a mouth-watering swag of prizes.

Finally, congratulations to Zoe, who not only submitted the winning hand but was also part of the winning Queensland team for the pre-conference Code-warrior event. About the only piece of Queensland’s weekend dominance that she couldn’t claim a personal hand in was the Maroons thumping of the Blues in League…

Next objective: ramp up the game for Adobe MAX! All we need to do is scale it up to 5,000 attendees! 😛