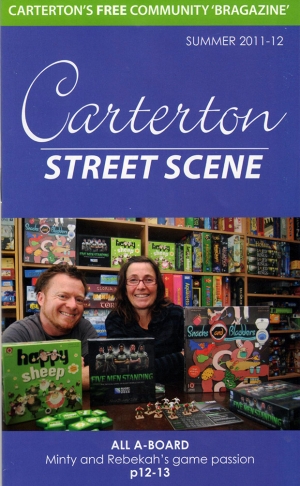 We’ve been featured in the latest Carterton Street Scene! Ian came out and had a chat and took some great photos, and we’re chuffed to be smiling away on the cover and in the centre spread.

The article covers our recent exploits in boardgame development along with some our website adventures, and rounded out with a little bit of bio.

So if you’re in the area having a coffee, keep an eye out for a copy because what more could anyone want than a piece of our astonishing fame? Carterton today, Clareville tomorrow, Masterton by 2027! 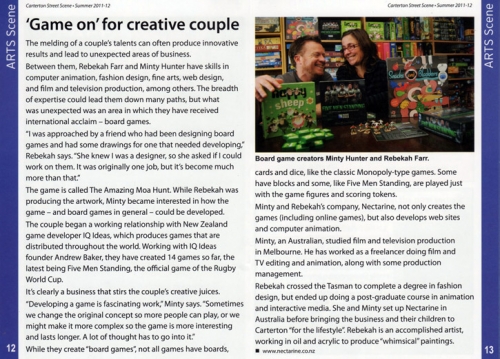 Game on’ for creative couple

The melding of a couple’s talents can often produce innovative results and lead to unexpected areas of business.

Between them, Rebekah Farr and Minty Hunter have skills in computer animation, fashion design, fine arts, web design, and film and television production, among others. The breadth of expertise could lead them down many paths, but what was unexpected was an area in which they have received international acclaim – board games.

“I was approached by a friend who had been designing board games and had some drawings for one that needed developing,” Rebekah says.”She knew I was a designer, so she asked if I could work on them. It was originally one job, but it’s become much more than that.”   The game was called The Amazing Moa Hunt. While Rebekah was producing the artwork, Minty became interested in how the game – and board games in general – could be developed.

The couple began a working relationship with New Zealand game developer IQ Ideas, which produces games that are distributed throughout the world. Working with IQ Ideas founder Andrew Baker, they have created 14 games so far, the latest being Five Men Standing, the official game of the Rugby World Cup.

It’s clearly a business that stirs the couple’s creative juices.”Developing a game is fascinating work,” Minty says. “Sometimes we change the original concept so more people can play, or we might make it more complex so the game is more interesting and lasts longer. A lot of thought has to go into it.”

While they create board games, not all games have boards, cards and dice, like the classic Monopoly-type games. Some have blocks and some, like Five Men Standing, are played just with the game figures and scoring tokens.

Minty and Rebekah’s company, Nectarine, not only creates the games (including online games), but also develops web sites and computer animation.
Minty, an Australian, studied film and television production in Melbourne. He has worked as a freelancer doing 5film and TV editing and animation, along with some production management.

Rebekah crossed the Tasman to complete a degree in fashion design, but ended up doing a post-graduate course in animation and interactive media. She and Minty set up Nectarine in Australia before bringing the business and their children to Carterton ”for the lifestyle”. Rebekah is an accomplished artist, working in oil and acrylic to produce whimsical paintings.