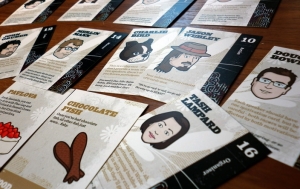 Some of the cards for the Webstock 2011 racing game.

There was the frantic rush to complete all elements of the Webstock racing card game, which included writing up all the rules and flavour text for the 43 cards, checking it all to make sure it went to the printers without error, and sorting out Twitter for the rolling release of further rules and tips. I was very glad to be working with the fab Kai and Diane again; we do really seem to complement each other in ideas and skills.

I had also (in a moment of rashness) decided to add an online component, partly as a reason to explore the fantastic open source Flash game framework known as Flixel. Well, nothing like jumping in at the deep end with a burning deadline to make the neurons fire! 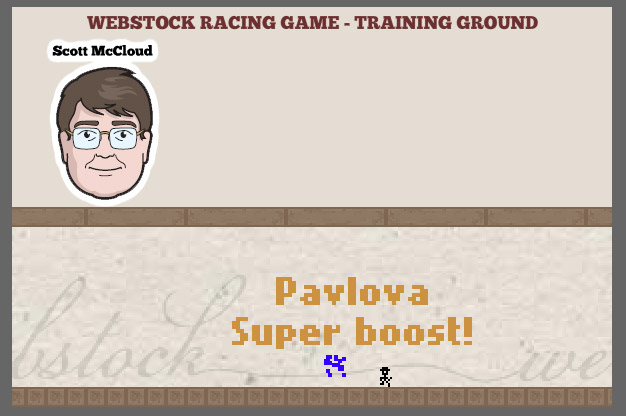 The online component of the Webstock 2011 racing game

Happily, with a couple of late nights it all got squirreled away in time for the conference; at that point, it would mainly be about how it was received by the 700+ attendees. This was an evolved version of the game we ran in 2009, and it featured a lot more cards and rules, as well as more variations in how it worked. Would it be too complex? Would it fail to grab people the same way?

I shouldn’t have worried. A few hours after the online game went up, and an email arrived with this spreadsheet: 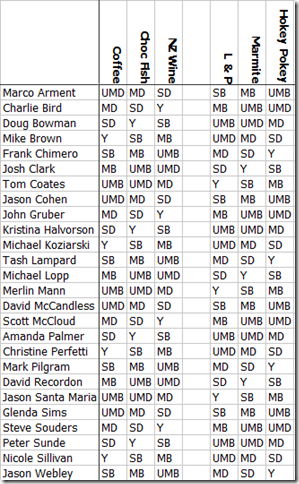 Yup, that’s the breakdown of how different foods affected the 29 speakers- all of which can only be garnered by giving the online version a serious, dedicated thrashing.

Lots of folks were trading cards, some were getting speakers to sign them, and others were squeezing Kai and Diane and I for tips and insider hints! (Nice try, but we weren’t giving anything away.)

One of my favourite comments came from @amiemccarron who said “I didn’t put in an entry, or even collect the cards that much, but I had a great time talking to people about them.” For me, that’s a big part of the game’s success: if it breaks down barriers and gets conference attendees talking then that’s fantastic. One of the best things you can get out of a good conference is great connections with people around you; if the game helps that, hurrah!

In the end, we had 107 entries (right around 15%) and a lot of frantic typing to do to get things prepped for Kai’s scoring code to check who had won. In the end, it was Simon Green who took away the brand new iPad; when we realised later that he’d coded up a perl script to test combinations, it kind of made sense that he won- amazing dedication!

Second was KaiXin Shum who scored a ukulele signed by the astonishing Amanda Palmer and Jason Webley. (Seriously, if either of them are playing near you, drop everything and head straight over- they are pure awesome!)

We also handed out two spot prizes made up of boardgames that Bek and I have worked on. One went to Sacha Judd for enclosing a love letter within her entry; the other to William O’Neil for his great portmanteau of Mike and Tash: MISHTAKE.

There was one further moment of dedication that I sadly missed mentioning due to lack of time when we were announcing the winners. That was the superb effort by John Barstow who not only put in an entry, but included the matching speaker cards from the 2009 conference! Crazy man- fantastic idea!

So all in all, we’re very happy with how the card game went. If you’re running a conference and are interested in having something similar, drop us a line.

I’ll post soon about how astounding the actual conference was- well, the bits I got to see when not running around doing game-specific stuff! Webstock really makes NZ the centre of the universe for a couple of days: it’s not a surprise it sold out, because my brain’s still slightly melted from the glow of its sheer awesomeness. I will report more soon.[/fusion_builder_column][/fusion_builder_row][/fusion_builder_container]