You’re poised on the emerald pitch at Eden Park for the Final of Rugby World Cup 2011. It’s the dying moments of the game. The score is deadlocked and the crowd is screaming. The ball is passed out to the back line: the outcome hinges on what you do next!

Five Men Standing is the official game of Rugby World Cup 2011. It’s for both lovers of the glorious Game, and those who have never held a Rugby ball in their hands. Fast paced, competitive, and with no sissy turn taking, this is a game of frantic action and fun!

Each player controls a set of 5 Rugby players, drawn from 2 of the world’s top-ranked teams competing in RuWC 2011. How you manipulate, position, and toss these players will determine the ultimate victor.

We’ve been very busy inventing, designing and otherwise beavering away at a new game, and we’re very excited about it! It’s called Five Men Standing, and it’s the official game of Rugby World Cup 2011. Roll on Rugby madness- New Zealand is going to be a vibrant, pulsing party-land next year!

This game is a big step for us, because it’s a true 50/50 collaboration with IQ Ideas– we’re co-inventors and are contributing half the manufacturing and licensing costs. It’s quite a commitment, but we know we’ve created, a fun, frantic game that also looks amazing, so we believe it’ll do very well and has the potential to be huge.

I’ll post more details once I’ve finished creating the official website, but here’s a teaser shot of the box front and back to get rugby fans salivating!

** UPDATE ** : There’s been demand for the site, so even though I have plans to put much more content online, you can visit what’s there now at fivemenstanding.com ; in particular, the How To Play animation seems quite popular! 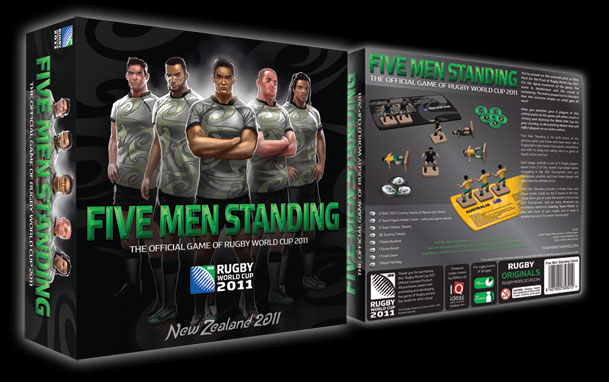