Five Men Standing, the official game of Rugby World Cup 2011 that’s a collaboration between us and IQIdeas, has been getting a bit of coverage lately.

Andrew Baker spoke to Murray Deaker on Newstalk ZB last night about the game, there’s an upcoming Otago Daily Times article and we chatted to Kerri Bowling of the Wairarapa Midweek and scored front-page coverage! Woot! World famous in Carterton (and, well, the rest of the Wairarapa).

Hey, is Oprah’s still visiting the big west isle? Is it too late to score an interview there? I’m happy to jump up and down on a couch… 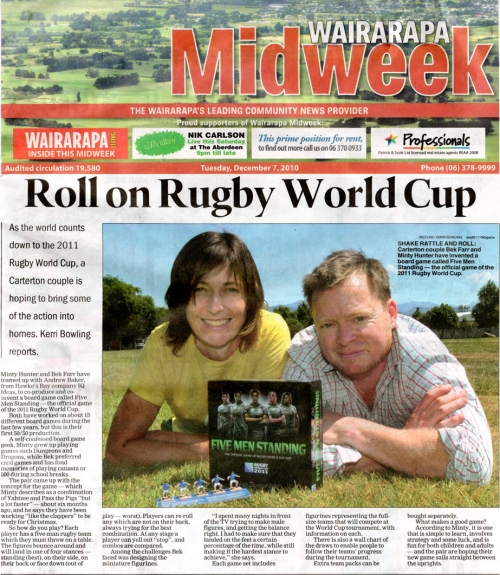 As the world counts down to the 2011 Rugby World Cup, a Carterton couple is hoping to bring some of the action into homes. Kerri Bowling reports.

Minty Hunter and Bek Farr have teamed up with Andrew Baker, from Hawke’s Bay company IQ Ideas, to co-produce and co-invent a board game called Five Men Standing – the official game of the 2011 Rugby World Cup.

Both have worked on about 15 different board games during the last few years, but this is their first 50/50 production.

A self-confessed board game geek, Minty grew up playing games such as Dungeons and Dragon, while Bek has preferred card games and has fond memories of playing canasta or 500 during school breaks.

The pair came up with the concept for the game – which Minty describes as a combination of Yahtzee and Pass the Pigs “but a lot faster” – about six months ago, and he says they have been working “like the clappers” to be ready for Christmas.

So how do you play? Each player has a five-man rugby team which they must throw on a table. The figures bounce around and will land in one of four stances – standing (best), on their side, on their back or face down (out of play – worst). Players can re-roll any which are not on their back, always trying for the best combination. At any stage a player can yell out “stop”, and combos are compared.

Among the challenges Bek faced was designing the miniature figurines.

“I spent many nights in front of the TV trying to make male figures, and getting the balance right. I had to make sure that they landed on the feet a certain percentage of the time, while still making it the hardest stance to achieve,” she says.

Each game set includes figurines representing the teams that will compete at the World Cup tournament, with information on each.

There is also a wall chart of the draws to enable people to follow their teams’ progress during the tournament.

What makes a good game? According to Minty, it is one that is simple to learn, involves strategy and some luck, and is fun for both children and adults- and the pair are hoping their new game sails straight between the uprights.